Today is Wednesday, October 5, 2022 The Water Taxi is not running.

When the Communications sub-committee met at the Fort Trumbull Visitors’ Center in New London, members were so impressed that they suggested it as one of the possible venues for a TRHP informational presentation for key supporters this fall or next spring. Indeed, anyone living in the are who hasn’t visited the fort really owes it to themselves to see the amazing structures, state-of-the-art museum, and vista of the Thames River that make up one of the TRHC’s main attractions.

The Friends of Fort Trumbull has a great website with lots of photos and information on the history of the fort and upcoming events. Also make sure to visit DEEP’s official Fort Trumbull website. But after you’ve done that, by all means go over to the park itself (Walbach Street off Howard Street) and make a day of it. 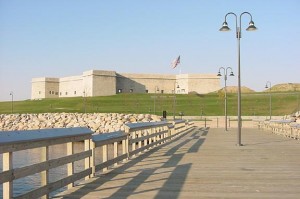 Joining the sub-committee at the Visitors’ center were Al Levere, State Parks Historian and author of the about-to-be-published State Parks Centennial History, Diane Joy, Supervisor of State Parks, Outreach and Education, and Bruce MacDonald, Director of the Connecticut Maritime Heritage Festival, coming up soon (September 9-12) so mark your calendars. 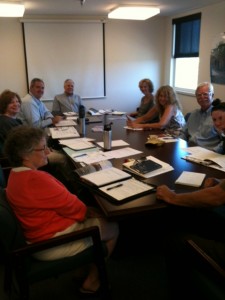 As with the Finance sub-committee, the Communications committee agreed to take its marching orders from the Governance and Organizational sub-committee, who will be meting shortly to draft a mission and vision for the new agency, as well as a short-and longer term strategic plan. However, this didn’t seem to slow the Committee down; a preliminary marketing plan draft was shared with other members, who agreed to combine it with some additional marketing documents and build upon it once the Governance Committee had met.

The Committee also appointed Chris Cox as the Team’s spokesman, with Penny Parsekian as backup, for answering queries from the public and media outlets.

An important discussion point at the meeting was the need to identify, prioritize and target all potential stakeholders in the heritage park plan, in order to make sure that everyone understands the purpose of the park and its inclusionary nature, the goals of the Transition Team, and the importance of the THRP to the unification and connection of all the sites. As the Chair so succinctly put it, “We’re trying to make a visitor experience coherent.”   So the first group from which to elicit continued support will be representatives, employees and volunteers from the heritage sites themselves. The second group would be community leaders and funders, followed by the business community in and around the park (whose initial core encompasses Fort Trumbull, Fort Griswold, and the New London Downtown area, to be followed by the Nautilus Museum). Then, agreed the Committee, we would have a great support base from which to begin to conduct outreach to potential visitors.