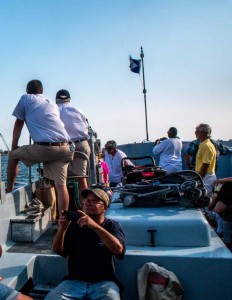 It’s official: the Thames River Heritage Park (TRHP) Transition Team held its first meeting yesterday (July 29th) with 17 members present plus Fort Griswold and Fort Trumbull Park Supervisor Henry Alves and reporter Judy Benson from the Day, who wrote a great opening article for us this morning. After introductions and a brief overview by Groton Mayor Marian Galbraith, we quickly got down to business and elected officers and divided up the tasks ahead, which for those of you who have been following TRHP’s progress this past year, are fairly extensive but really important for this next phase of the plan.

The main purpose of this Transition Team is to form the non-profit (501 c 3) agency that will oversee, with state and local authorities, the administration and smooth operation of this “park without borders.” Since this is a nearly-new concept in community planning, members of the Transition Team are relying on the collective experience of the group to really think outside the box to come up with innovative ways to make all the historic sites and surrounding areas as easy to find, and fun to visit, as possible. Already there are several important elements in place, from state and local Memoranda of Understanding, to the potential tourist draw that the new Coast Guard Museum will generate, to the two launches hopefully being donated by the Navy and transformed (with a $100,000 grant from the State Legislature) into sleek and snazzy water taxis. But by far, the main goal of the Team is to work itself out of a job and create the new, as-yet unnamed agency . . . in one year.

And from the activities of the first meeting, it looks like we may meet our goal!

Most of the sub-committees will be meeting separately before our next scheduled regular meeting on August 26th.  We’ll be reporting on each of these meetings, their accomplishments and how they see their specific goals connecting with those of the other subcommittees.  That way you’ll get an idea of how they have turned a charge written on paper into a working reality.

For example, the Governance Committee will be creating and refining the mission and vision of the new agency, which will necessarily drive how the Finance Committee sets up the fiscal documents and fundraising plan, and how the Communications Committee develops a marketing strategy.  It’s all quite like plumbing—everything’s connected.

For now, since the agency has not been incorporated, the Southeastern Connecticut Council of Governments (SECCOG) has agreed to be the fiduciary agent; Executive Director Jim Butler is on the team and a member of the Governance Committee.

Here’s a quick Who’s Who of Committee members and their Chairs:

The Thames River Heritage Park Transition Team as of July 30, 2015:

We’re also hoping to develop a late Summer “Keep the Momentum Going” Event that can dovetail with the Connecticut Marine Heritage Festival (September 9-12, 2015) . Keep checking here, and their website, for more information!

PrevPreviousFollow our blog for the latest news
NextFinance Sub-Committee ReportNext