Of Time and the River

The Thames River estuary is a place of living history.  From the deck of a boat, in one sweeping view, a visitor can survey a dynamic urban landscape developed through a continuous and ongoing engagement with the River over the course of centuries.  Since before the American Revolution, a living, working waterfront has been the hallmark of the river where it empties into Long Island Sound. The area’s whaling past endures in the ornamentation and stonework of buildings and monuments. Massive cranes and dry docks tell where submarines are assembled, and the US Coast Guard Academy testifies to the coastal defense service that was founded here and remains a vital part of the region’s economy.

A Park without Boundaries

Thames River Heritage Park is the first Heritage Park in Connecticut. Unlike a conventional state park with fixed boundaries, the park draws together historical and contemporary sites, communities and institutions on both sides of the river where visitors may experience the region’s many heritage attractions.  Four anchors—Fort Trumbull State Park, Fort Griswold Battlefield State Park, the Submarine Force Museum, and soon the National Coast Guard Museum—provide visitor services.  The anchors and many smaller sites, listed below, are tied together by a water taxi system that allows visitors to experience the Thames River itself as the heart of the region.

How to Ride the Water Taxi 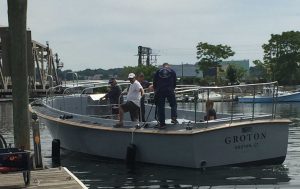 Find the schedule, ticket prices and boarding rules on our water taxi page or at any of the three water taxi stops – in New London, at City Pier in the Historic Waterfront District and at Fort Trumbull, or in the City of Groton, at Fort Street. The water taxi runs in a loop from 10 AM to 9 PM, Friday through Sunday, from July to mid-September. The sites listed here are within walking distance or a short drive from a water taxi landing. 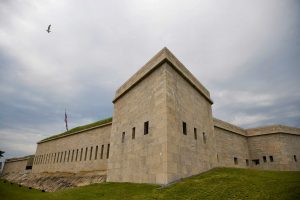 Fort Trumbull, a massive granite fort built in the Egyptian Revival style and completed in 1852, whose ramparts provide spectacular views of the harbor and the best overview of the park. As the newest state park in Connecticut, it features a world class visitor center depicting over 225 years of military history through state-of-the-art multimedia theaters, touch screen exhibits, 3-D models and extensive graphics.

American’s only Nobel Prize winning playwright, Eugene O’Neill, lived an itinerant life, but spent considerable time in his youth at the Monte Cristo Cottage, the setting for one of his best-known plays, “Long Day’s Journey into Night.” O’Neill transformed American theater from what was essentially melodrama into plays that provided insight into the human condition. 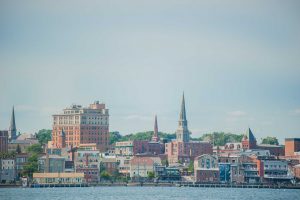 New London’s Historic Waterfront District buzzes with delicious dining experiences, shops, music and art venues. More than 30 eateries populate this 26-block National Register Historic District. Nathan Hale, Benedict Arnold, and Eugene O’Neill walked these streets. America’s greatest architects left their mark on the buildings. For example, the architect of Carnegie Hall in New York City built the Mohegan Apartments on upper State Street, and Henry Hobson Richardson’s last monumental public building in American is Union Station at the bottom of State Street.  From the collection of Tiffany windows at St. James Church to the restored movie palace, the Garde Arts Center, to the quirky shops and plentiful entertainment, there is much to see and do. The Mystic Whaler offers day sails and lobster cruises from City Pier.

Within walking distance of the water taxi landing are the Hempstead Houses. Here in Colonial times, Joshua Hempstead wrote in a diary almost every day of his adult life, a record that is used by scholars worldwide. American patriot Nathan Hale taught at the Nathan Hale Schoolhouse, where visitors today can read some of the moving letters he wrote to friends and family during his all-too-short life. The oldest continuously operating US custom house can be visited at the Custom House Maritime Museum, designed by the architect of the Washington Monument. Nearby, the Shaw Mansion was naval headquarters during the Revolution, and boasts a priceless collection of documents and artifacts.

A little further afield, the Lyman Allyn Art Museum, legacy of a whaling fortune, graces the hill overlooking the town. It is known as a mini Metropolitan Museum of Art for the breadth of its collection of European and American fine and decorative art.  Sharing the hill is the top-rated liberal arts institution Connecticut College and the equally prestigious US Coast Guard Academy. 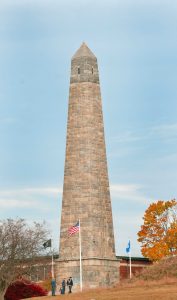 Fort Griswold occupies a vantage point 125 feet above the river. The fort was hurriedly completed in 1781, whereupon it became a bloody battlefield, as British troops under the infamous traitor Benedict Arnold attacked. Eighty-five of the 165 local defenders lost their lives on that September 6, a loss commemorated annually to this day. The Groton Monument was the first obelisk completed in the US, even before Bunker Hill. The battlefield, the Monument House Museum and the monument itself are all part of the State Park and open to the public.

Home to some of the region’s most legendary sea captains, this charming neighborhood boasts the Avery-Copp House, a Victorianized colonial home furnished with what the original inhabitants used on a daily basis. Experience a time gone by and enjoy tours by costumed guides. The Ebenezer Avery House sheltered the wounded after the tragic Revolutionary War battle that took place at the nearby fort and remains a testament to the family that heroically took a stand here.

Like a wedding cake rising out of the Sound, Ledge Light, built in the Second Empire/Colonial Revival style in 1909, offers an interpretive center, gift shop and a journey through the light house’s remarkable history.

The Subvets WWII National Memorial East on the river bank with a spectacular view of the steel trusses of the Gold Star Memorial Bridge is dedicated to the 3,617 submariners who lost their lives during WWII and displays the sail of USS Flasher heading down the river to sea.

At the Submarine Force Museum & Library, the public is invited to step aboard USS Nautilus, the world’s first nuclear submarine known for its explorations under the Polar ice. Her keel was laid by President Harry S. Truman at the Electric Boat Shipyard in Groton in 1952. Discover why Jules Verne and the Beatles were fascinated by submarines by visiting the museum, which has the nation’s finest exhibits and collections of America’s submarine heritage.