When relatives come to the area for the holidays . . .

. . . take them to parts of the new Heritage Park!

That is what your blogger did when her sister visited from Manhattan this Thanksgiving. We grew up in what is called the Groton Bank neighborhood. It’s full of historic homes (ours was one), including of course the Avery Copp house, the Mother Bailey House, and Fort Griswold, but when we were kids it was just one big playground, especially one of our favorite places on earth—Fort Griswold.  And as far as bells and whistles go, the Fort may not be all that, but there is something quite magical about the place that stays in your imagination and continues to draw visitors from both far away and down the road. As we were walking through it that mild Friday afternoon, we both admitted that the feeling here is a lot like Gettysburg—you really get a sense that something monumental, scary, and visceral happened on this ground. Even as kids we could almost hear the soldiers, their footsteps down the dirt embankments. So here is a little photo-tour of what you might see if you take a water taxi over to the foot of Fort Street and walk up to Fort Griswold.

Here is the Thames Street entrance, which actually is not considered the “main” entrance, but it’s what you see as soon as you get off the dock on the Groton side. 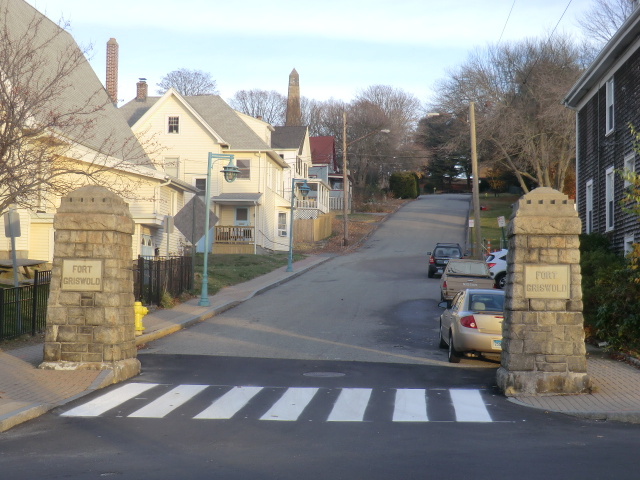 On your right is the Ebenezer Avery house (not to be confused with the Avery-Copp house), which served as a makeshift hospital for British soldiers, and which was moved from Thames Street to this location in the 1970’s and then restored later.

You can go into the Fort this way, which will put you at the bottom of the fort, or if you have a car or like to walk you can continue on up to Monument Street and enter through the main gate. 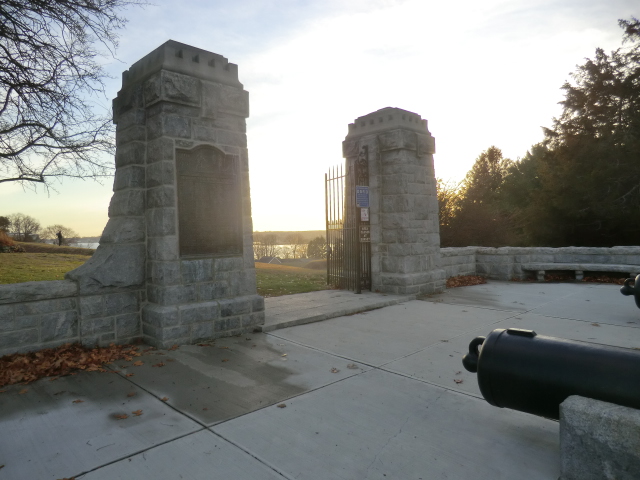 This is where you can read about the Battle of Groton Heights of September 6, 1781, and see the plaque listing all the colonial soldiers who died here. You can also read about past and current efforts to restore and maintain the “earthworks—” the mounds of dirt and stone that protected the fort’s highest area. 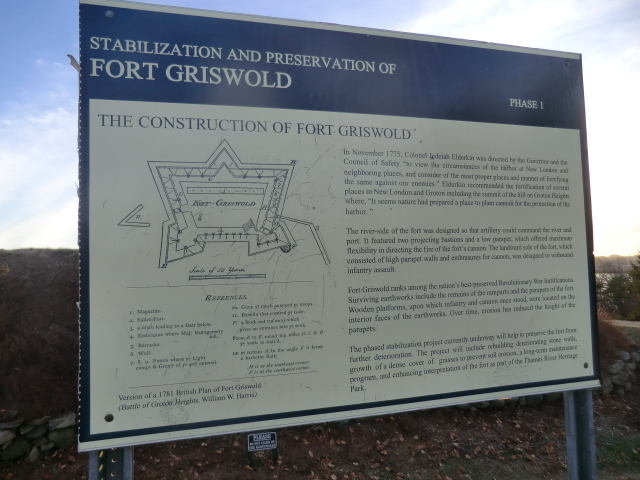 You can also have your photo taken sitting on the cannons—I think it’s almost a law. 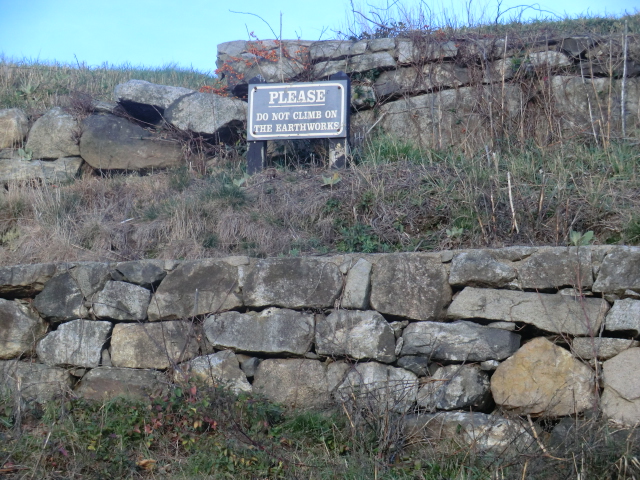 I understand why you can’t climb on the earthworks now, but I have to say, being a kid here was a ton of fun.

Then you can go through the tunnel to the protective gulley that leads down to the main battlefield bordered on two sides by gun mounts facing the river. 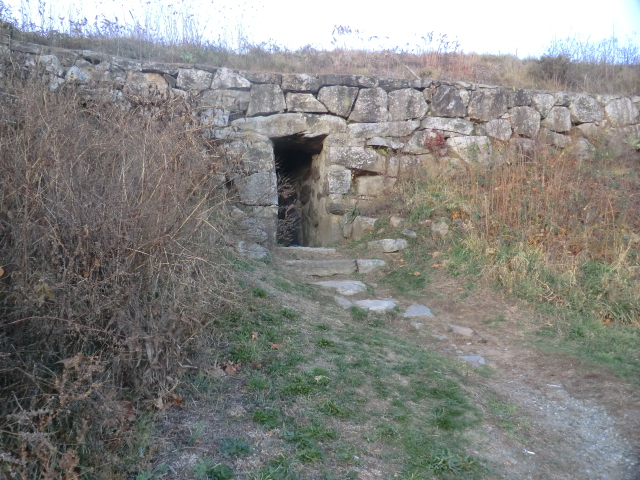 The fort, in that days of your blogger’s callow youth, was completely overgrown and it was impossible to pass through these earthen canals—the State has done a great job of restoring the site to the way it must have looked (minus a few of the cannons) at the time of the battle. 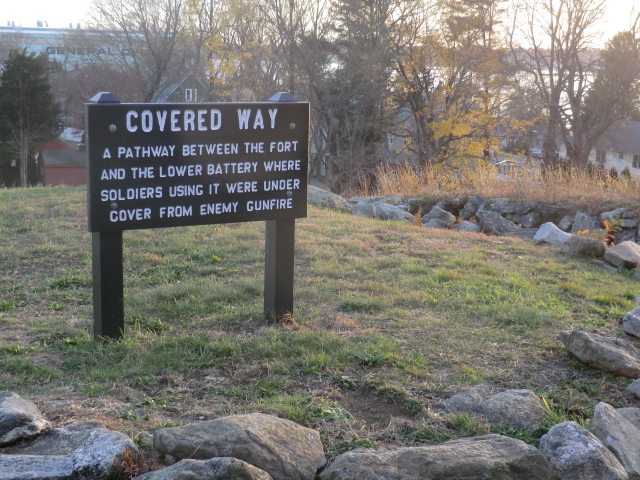 Down in the main part of the fort you can look at the shot furnace and the Powder Magazine, 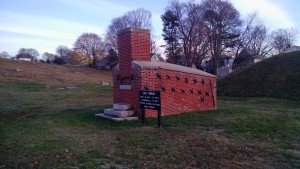 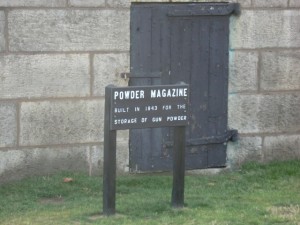 check out the gun mounts, with New London winking across the river, 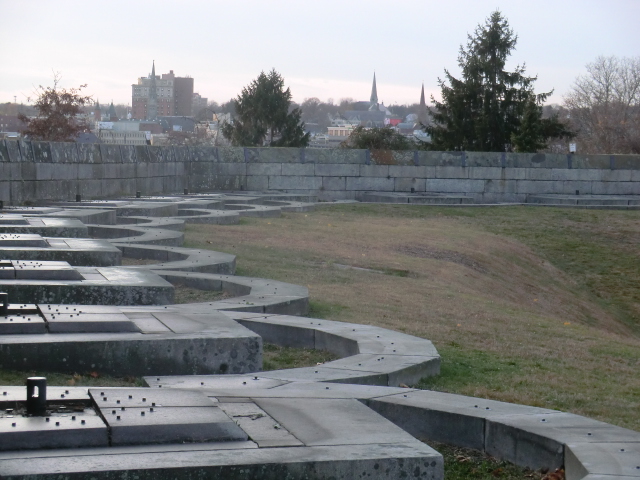 and then take a look over your shoulder at the earthworks and the Monument in the background. 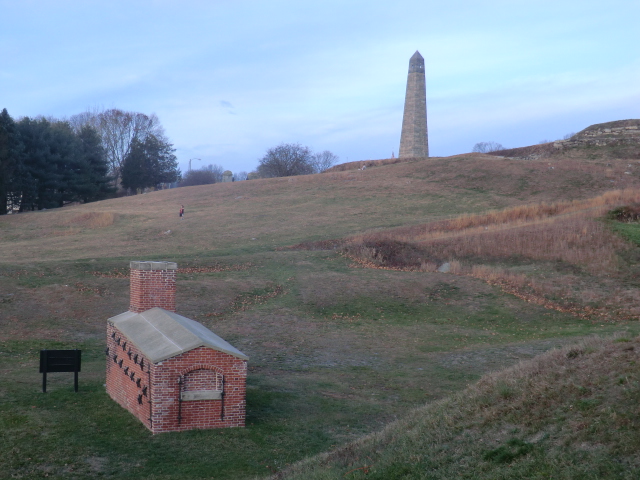 There is something indescribably lovely about being here, and I can say that after all these years, I never get tired of visiting it.

But wait! Our trip is not complete. The sun was setting so we took a quick drive down to Eastern Point Beach, at the tip of the Thames River, to enjoy the beautiful sky and the New London shoreline. 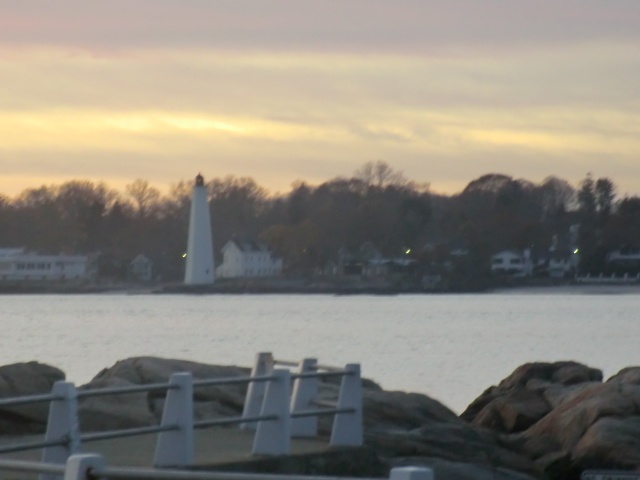 For some reason it’s hard to get a non-fuzzy photo of New London Light—it keeps moving, or something. But you can see how, even this late in the season, families and walkers and admirers are still spending time near the Thames River; it’s really that spectacular. (Ledge Light is in the background in the photo below.) 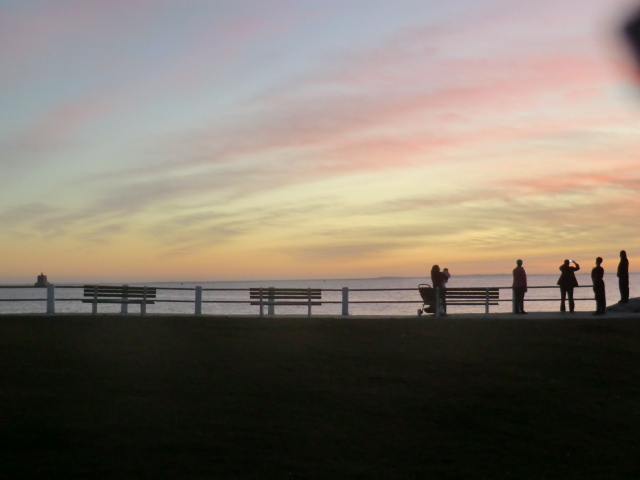 So for those of you who are wondering, “Just what is there to do in the new Heritage Park?” here are two of possibly two hundred stories.

PrevPreviousOur water taxis are on their way
NextThe boats are here!Next