I invite you to accompany me on an imaginary voyage around the lower Thames River onboard the Enviro-Lab, Project Oceanology’s research vessel and floating classroom.

Leaving the docks at UConn’s Avery Point campus behind us, we enter the mouth of the river with New London Ledge Light to our port. We keep a careful watch for the frequent ferries to Long Island, Block Island and Fishers Island, nuclear submarines from the Navy base just upriver, and a multitude of other boats. The baroque Eagle, a 295foot long tall ship used by the U.S. Coast Guard Academy to train cadets, might cross our path, or a commercial fishing boat, water taxi, cargo ship, recreational power boat or sailboat.

This busy harbor, flanked by Groton on the east and New London on the west, is the easternmost deep-water port in Long Island Sound, and offers numerous opportunities to study and teach about how we depend on and care for our marine resources.

The Thames River estuary is a major educational resource for Project Oceanology, a marine science and environmental education center located at Avery Point. Every year since it was founded in 1973, Project Oceanology has brought more than 20,000 students from elementary grades to college onto the Thames onboard Enviro-Lab. The students collect marine life, sample bottom sediments, measure water quality parameters and learn about the importance of preserving and protecting coastal water and the ocean.

As the founder and director of Project “O,” I have traveled up and down the Thames dozens of times annually to conduct marine science courses for teachers, coastal management workshops for community leaders and research. I have experienced some delightful surprises on the Thames such as sighting a seal resting on a Styrofoam float halfway up the river and a harbor porpoise cavorting in Norwich Harbor. There have also been some unpleasant moments, including pulling up a very heavy old rusty motorcycle and a toilet in our badly ripped-up trawl net at the river mouth. Tough I’m now retired, my interest, appreciation and concern for the Thames has not diminished.

With the anticipated establishment of the Connecticut National Estuarine Research Reserve (CT NERR), the lower portion of the Thames will take on added significance as one of the primary regions included in the reserve. The many different human uses of the Thames offer unique opportunities for the CT NERR to carry out its programs and objectives. These include research and monitoring, education, stewardship, resource management, public access and partnerships involving diverse audiences carried out under principles of environmental justice.

More so than any of the other regions of the CT NERR, the lower Thames embodies an area where many diverse and sometimes conflicting human activities occur along its heavily trafficked waters and developed shores. One example is the dredging needed to maintain the navigation channel for military, commercial and recreational vessels. Because of concerns about the ecological impact of the removal and disposal of potentially contaminated bottom sediments, regulators undertake an extensive analysis before permits are granted.

The CT NERR has the potential to generate many new scientific discoveries about the complex and dynamic Thames River ecosystem and to help implement best management practices for the ever-changing human society living and working in its watershed. Among the most urgent future challenges facing this region is the need to respond to coastal flooding due to rising sea level, by conserving and protecting critical habitats such as tidal wetlands. We also need to understand the health and environmental impacts of contaminants of emerging concern, such as microplastics and hormones discharged into the water. These remnants of medications and other substances flushed down sinks and toilets are not removed during the wastewater treatment process.

Continuing our trip up the river, on the west we pass the New London Harbor Light, the fourth oldest operating lighthouse in the country, perched on the rocks of the city’s shoreline. On the eastern shore in Groton we pass the Avery Point campus, where the CT NERR headquarters will be located. Many homes, marinas and restaurants can be seen on both sides of the river, along with fishing docks. Small beaches such as Shennecossett and Eastern Point in Groton, and Ocean Beach and Green Harbor in New London provide important recreational opportunities and access to the water for the diverse populations living in New London, Groton and beyond.

Close to these residential, commercial and recreational sites are the outfalls to three municipal wastewater treatment plants as well as Electric Boat (EB), a major heavy industrial site which constructs submarines and one of the largest employers in this region. the effluent from the wastewater treatment plants and from EB must be well treated and carefully monitored to be sure that they do not contain toxic substances or pathogenic microorganisms that could harm human health or damage the environment.

When we reach the Gold Star Memorial Bridge that carries Interstate 95 above the Thames, we are at the approximate northern boundary for the CT NERR.

A short distance to the north of the bridge we can see the U.S. Coast Guard Academy and the Naval Submarine Base New London. Further north, the shore of the river is much less developed. The Thames River is the southern end of the third largest watershed in Connecticut, originating at the Massachusetts border, and fed by many rivers such as the Shetucket, Yantic, Natchaug, Quinebaug and Willimantic. The Thames is the estuarine and tidal, portion of this system. It starts in Norwich and discharges into Long Island Sound at New London and Groton, about 15 miles downstream. This watershed contains many farms and small towns; runoff from the watershed carries nutrients and other contaminants that ultimately end up in the Thames and the Sound.

Except during extreme rainfall or flooding events, the salty tidal waters dominate the Thames. Seawater intrudes upriver as far north as the dams in Norwich and occupies all but the upper 3 to 6 feet of the water column. the normal salinity at the bottom of the Thames in Norwich is nearly the same as in Long Island Sound. A crab crawling on the bottom of the Thames or a fish swimming in all but its near-surface water might “think” it was still in the Sound based on the salinity. The freshwater supply to the river is controlled by dams in Norwich on the Shetucket and Yantic rivers and at many other locations further upstream in the watershed, such as the Mansfield Hollow Dam and at West Thompson Lake.

Research conducted by science teachers and high school students under the direction of Project O staff has determined that the bottom layer of salt water in the upper portion of the Thames is persistently hypoxic (nearly devoid of oxygen), especially during the warmer months. Further study indicated that this hypoxia is caused, at least in part, by the over-enrichment of the water by nitrogen wastes coming from upstream sources such as farms, wastewater effluent, and lawn fertilizer. Significant efforts are being made by Connecticut’s Department of Energy and Environmental Protection and environmental organizations to reduce this nitrogen loading through treatment, education and best management practices. Upgrades to the Norwich Wastewater Treatment Plant now underway are one of those efforts.

We now turn the boat back downstream at the I-95 bridge and pass by State Pier on the New London shore. Tis large facility is the proposed site for the assembly of wind turbines which will be transported to create offshore wind farms in the North Atlantic to provide renewable energy to the populous Northeast.

We also see a busy urban scene on the downtown New London waterfront, with people boarding trains and ferries, fishing of City Pier, visiting historical sites such as Fort Trumbull State Park and the New London Custom House Museum, and enjoying restaurants and live music on the waterfront park and river walk.

Leaving the mouth of the Thames behind, we pass south into Fishers Island Sound (FIS), parts of which are also included in the CT NERR. We can observe commercial fishing boats trawling for bottom fish, hauling lobster traps and releasing clams for restocking shellfish beds. For nearly 50 years Project O has conducted frequent trawls in this area and kept records of the catch. A recently published analysis of this long-term data set (Snyder et al., 2019), shows that the species composition has shifted, with an increase of species such as spider crabs that prefer warmer water, and declines of cold water adapted species, such as lobster, rock crabs and winter founder. This shift correlates very closely with the above-average rates of warming and acidification of the water that have been recorded over this same period, presumably due to climate change.

A study I conducted in FIS and adjoining estuaries of blue crabs showed that their abundance in the summer is highly variable from year to year and is strongly correlated with the water temperatures of the prior winter (Weiss & Downs, 2020). Te blue crab is a warm water adapted species that is near the northern end of its range in FIS. the large fluctuations in its abundance are probably caused by varying overwinter survival rates. Additional research is needed to determine if the warming of the water due to climate change leads to an increase in the blue crab population over the long term.

On our boat tour we have seen many different environments and human activities within the CT NERR that will make excellent subjects for its future research, education, outreach, stewardship and other programs. I am pleased and excited that Project Oceanology will be one of the CT NERR partner organizations and will help the CT NERR achieve its objectives in the Thames, FIS, and other regions of the reserve.

Reprinted with permission from Connecticut Sea Grant, which published these articles in the Fall-Winter 2021-2022 issue of Wrack Lines, its biannual magazine, and that the complete issue can be found here: https://seagrant.uconn.edu/?p=8075

Howard “Mickey” Weiss founded Project Oceanology in 1972, was its Director for 30 years and is currently conducting research at this organization. Project Oceanology is non-profit marine science and environmental education center located on the Avery Point Campus of the University of Connecticut in Groton. Project Oceanology provides boats, oceanographic equipment, a waterfront laboratory, staff and curriculum materials to enable students from elementary through graduate school to study the marine environment through first-hand, on-the-water experiences.

Mickey has taught courses in marine environmental education for science teachers in the U.S., Mexico and Puerto Rico and is the recipient of numerous grants and awards including a J. W. Fulbright Senior Scholar Award and grants from the National Science Foundation, U.S. Agency for International Development, U.S. and CT Depts. of Education and other federal and state agencies

Mickey has written two books, published articles in scientific journals, and presented at many research conferences. 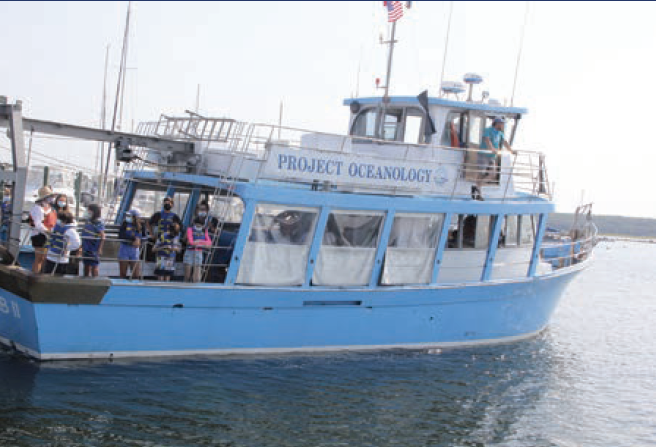