The Transition Team hopes that everyone interested in the new Heritage Park can join in celebrating the “official” opening of the water taxi service on July 3rd, even though it will already have been running for a few weeks. But at the time of the party all the kinks should be ironed out (if there are even any kinks to iron) and the taxi will be running smoothly and on schedule.

There’ll be a ribbon cutting at Pier 7 in new London’s Fort Trumbull and a short program from 3-4pm. Your faithful blogger does not know if there will also be cake, but she hopes so. Never pass up the opportunity to eat cake at Fort Trumbull, is what I always say. View the complete invitation here.

And for those of you who haven’t heard, the newly formed agency, the Thames River Heritage Park Foundation, is offering Charter Memberships, which entitle you to unlimited water taxi rides, an end-of-season exclusive cocktail party and other discounts and incentives, so be sure to look into this too. Find more info on our website here. 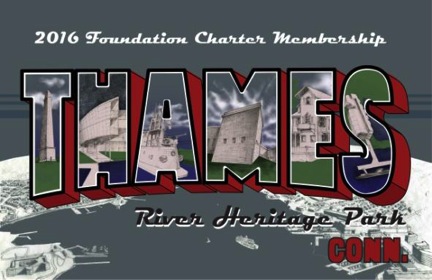 But whatever you do, stop by Fort Trumbull on July 3rd and meet the crew of the water taxis, hear what we’ve got planned all along the river for the summer, and enjoy Fort Trumbull, one of the area’s great parks.

The Thames River Heritage Park Foundation, which is what the new non-profit entity will be called, received its certificate of incorporation this week, bringing it one step closer to 501 c 3 (tax-exempt) status.

You can read the Foundation’s Articles of Incorporation here.

We’ll keep you posted on the next steps, including the appointment of the new Board of Directors and the upcoming presentation to heritage sites and municipalities within the Park so they can better understand how we can all work together for the benefit of individual organizations, residents, and the thousands (dare we say hundreds of thousands?) of visitors who will now be taking advantage of all that the Heritage Park area has to offer.

The Transition Team met on October 28th and various subcommittees reported on their progress; all activities appear to be on schedule, and even potential office space for the new non-profit was discussed.

What was really exciting, though, was the final approval of the name of the new entity, as well as its mission statement.

The new non-profit will be called the Thames River Heritage Park Foundation.

This is its mission statement:

“The Thames River Heritage Park Foundation is a nonprofit organization  whose mission and purpose is to develop, promote, coordinate, and help preserve a new type of Connecticut state park known as the Thames River Heritage Park, which will include sites of national and historical significance along the Thames River in and around the City and Town of Groton and New London, located across from each other near the mouth of the river. The Foundation carries out its purpose in collaboration with the State of Connecticut, the United States Coast Guard, the United States Navy, local municipalities and regional authorities, and the numerous heritage sites within its area.  A primary role of the Foundation is the oversight and operation of a water shuttle system designed to transport visitors to and from sites of significance on both sides of the Thames River.”

We are now eagerly awaiting word, which should come in two weeks, on the two Navy surplus boats we’ve applied for. With the boats plus the approval of our Urban Act grant application, which we hope will be on the Bond Commission agenda in January 2016, we will be well on our way to having the water taxis operational by next summer. Fingers and toes crossed!