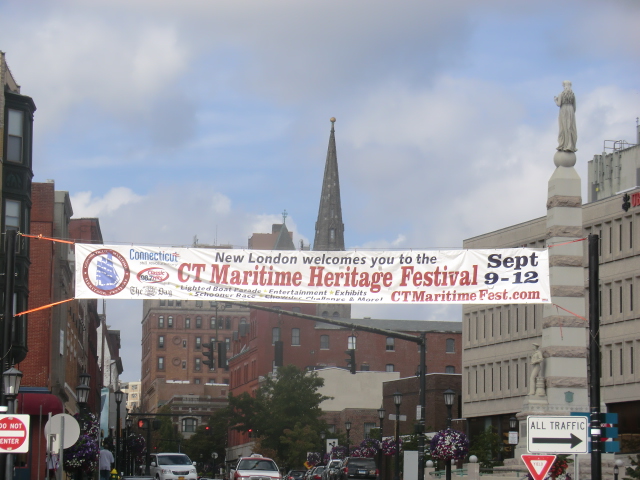 “The Connecticut Maritime Heritage Festival, a production of OpSail CONNECTICUT, is a celebration of our state’s maritime heritage, history and spirit of innovation.  Working with community partners, our purpose is to draw attention to the important role the sea has played in the formation of our state and nation, and to honor the role schooners played in that development.”

Today was the official opening day of this (free) annual event, which marks the end of “Connecticut’s Coast Guard Summer” and celebrates the area’s rich history with four days of activities including schooner races, boat tours, dockside educational exhibits, a chowder contest, sea shanty performances, and lots of other entertainment.

Saturday, Sept. 12 will feature a variety of activities all day, including 24 dockside maritime education exhibits and programs, the Great New London Chowder Challenge, the Whaleboat Race, and the Schooner Race. 8pm is the start of the beautiful Lighted Boat Parade on the Thames River.

For a complete schedule of events, view the Festival Website here.

A cornucopia of sailing and auxiliary vessels are arriving at City Pier and Fort Trumbull, starting today, and you should go and see all of them. Many will be participating in Saturday’s schooner races In Fisher’s Island Sound. For a quick look and history, go to the Festival’s informative web page that shows photos of all the boats and gives brief histories.

But whatever you do, you MUST get to City Pier to see COLUMBIA, a steel hulled replica of the original 1927 Gloucester Fishing Schooner of the same name. 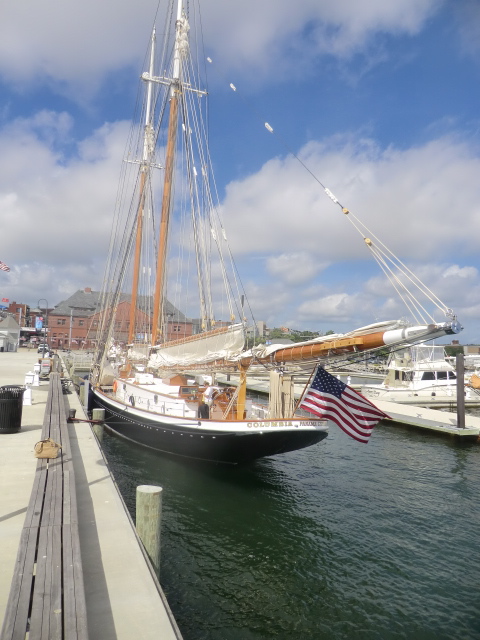 This is an amazing boat, but she will have some stiff competition from last year’s winner, Mystic Seaport’s BRILLIANT, an offshore classroom for the Seaport’s education programs. Also at the City Pier as of today is WHEN & IF, the 63 foot Alden schooner commissioned by General George S. Patton in 1939. Although this elegant and dignified boat is dwarfed by her current neighbor COLUMBIA, she has a friendly and exuberant crew, who told me that if they did not beat COLUMBIA Saturday, “at least we’re going to look awfully cute while we’re trying.”

New London-berthed MYSTIC WHALER and AMISTAD, Connecticut’s Flagship and Tall Ship Ambassador, will also be participating, and their crews are also busy getting ready.

Other ships that have committed to participation at the Festival (some of whom are already here) are the USNS FALL RIVER, a 338-foot Spearhead Class Joint High Speed Vessel. (Pier 7 at Fort Trumbull State Park), and the 130-foot 1931 fireboat JOHN J HARVEY, which will be taking spectators out Saturday to watch the race. HARVEY assisted during such notable fires as the Cunard Line pier fire in 1932, the burning of the NORMANDIE in 1942, and the ammunition ship EL ESTERO during World War II. Coast Guard Cutter IDA LEWIS, a 175-foot Keeper Class coastal buoy tender, is already at Pier 7 at Fort Trumbull and ready to visit.

The MARY E. of Essex, CT is a 75 foot clipper built in 1906, and the ROANN a 60-foot Eastern rig dragger from Mystic, and one of the few remaining examples of fishing vessels that once worked New England waters. In addition to being available for viewing at City Pier during the festival, ROANN will serve as the committee boat for Saturday’s schooner race. The LETTIE G. HOWARD is a fishing schooner and a designated National Historic Landmark. TREE OF LIFE hails from Newport and has circled the globe twice since 2013. Rhode Island’s Tall Ship OLIVER HAZARD PERRY is a 200 foot long, three-masted sailing school.

“For generations, Long Island Sound has been integral to our commerce, industry, and national defense,” said Lt. Governor Nancy Wyman. “Coast Guard Summer and The Maritime Festival are great ways to experience Connecticut’s rich nautical history, and honor the Coast Guard and Naval legacies, and celebrate the men and women who continue to serve.”