Submarines, Battlefields, and Betrayers. Military Stories on the Thames is back! Get your tickets today.

The forecast looks perfect for a harbor cruise this weekend. Come aboard. 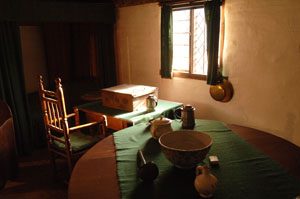 The 1678 Joshua Hempsted House in New London is one of New England’s oldest and most well documented dwellings. Adjacent to the Joshua Hempsted House is a rare stone house built in 1759 for Nathaniel Hempsted by Acadian exiles. Both structures survived the 1781 burning of New London and stand today as testaments of 17th and 18th-century daily life. Joshua Hempsted the second was born in 1678 in the house that bears his name. From 1711 until his death in 1758, Joshua kept a diary, which today is one of the best sources about life in colonial New London. Joshua’s diary provides hundreds of pages of valuable information, as well as his insight about early New London people and activities, including the life of enslaved resident Adam Jackson. The stone Nathaniel Hempsted House was constructed by Joshua’s grandson Nathaniel Hempsted. He was a merchant and one of three rope makers in maritime New London. The Hempsted Houses engage the public in understanding the historical roots, development and current-day implications of issues related to equality and freedom, with a special focus on slavery, and empower people to make a difference.