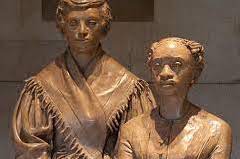 On May 27, 2021, the Friends of Fort Trumbull will present a program on Prudence Crandall, the Connecticut State Hero.  Because of Covid-19, this program will be presented on Zoom as part of the Friends 2021 program on Women’s Suffrage.

Many people know that Crandall established an early academy for African-American women in 1833; however, few realize that she also participated in the Woman Suffrage Movement and other social justice reforms after leaving Connecticut.  Joan DiMartino will share how Crandall continued her activism years after her school closed, focusing on her work with women’s rights.  As Crandall once said, “I venture to enlist in the ranks of those who…dare hold combat with prevailing iniquity.”

Presenter:  Joan DiMartino, Curator, Prudence Crandall Museum
Joan DiMartino was hired as the Curator of the Prudence Crandall Museum in Canterbury, CT in July 2019.  Formerly, she was the Executive Director of the Smith-Harris House in Niantic, and the Communications and Museum Administrator for the Colchester Historical Society.  She earned an MA in Public History from Rutgers University, where her scholarly focus was the Progressive-Era militant suffrage movement.

“Prudence Crandall (1803-1890) opened an academy on the Canterbury Green in 1831 to educate the daughters of wealthy local families. But she incurred their wrath the following year when she admitted Sarah Harris, a 20-year-old African-American woman who wanted the education to become a teacher herself one day. Harris’ admittance to the academy led some parents to withdraw their daughters from the school.

Crandall stood by her convictions, and instead established a higher education academysolely for African-American women in 1833, attracting students from as far away as Boston, New York, Providence, and Philadelphia. When the State of Connecticut responded later that year by passing the Black Law, making the school illegal, she endured a night in jail and three court trials before the case was dismissed in 1834. When a mob attacked the school two months later, Crandall was forced to close her academy.”