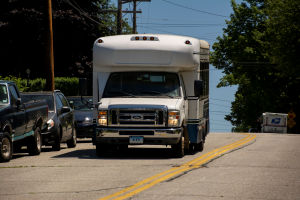 The Park will be offering complimentary shuttle bus service on the Saturdays listed below from the Thames River Landing to the TRHP Groton Historic Sites on the following Saturdays:

The Water Taxi leaves the Thames River Landing at 40 minutes after the hour.

Visitors can pick up the shuttle from any of the listed locations. With the exception of the Submarine Force Museum/USS Nautilus, all sites are within a 15-minute walk from the water taxi landing.

The free shuttle is made possible in part by the Submarine Force Museum Association and the Friends of Fort Griswold.